Though you live in your backyard, the world inevitably beats a path to your front door. Well-designed entryways can offer, privacy, light, charm and character to your home – without breaking style or the budget.
A new door, some well-placed windows or a fresh coat of paint can work wonders on a tired façade or an out-of-date entry. According to architect Richard Hartmann, “The ambiance of your home actually starts outside. It’s a whole sequence of events. Meandering through landscaping on a slightly curved path, for example, enhances the experience. ”

Here are a few tips for adding style:

* Add window boxes. They add color to a plain exterior when they’re overflowing with plants or flowers.
* Replace old hardware with brass numbers, handles, a mailbox or kick plate. Ceramic or hand-painted house numbers are good alternatives.
* Add a new front door, sidelights or transom. If you can’t afford to replace the door, add decorative molding around the one you have.
* Use clay pots or sculpture to spark an uninspired entry.
* Add an awning over doors or windows. With Florida’s seasonal rain showers, it’s practical as well as pretty.
* Add carriage lights on either side of the front door or low-voltage path lights along the walkway. They can help bring your best foot forward.

Sweet Beams: Inspiring everyone who lives under a new roof! is available on amazon.com. 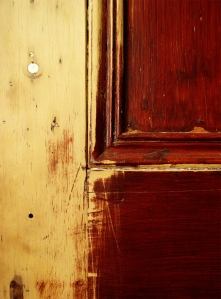 There is no such thing as maintenance – free. You’ve got to love your house into shape!

But what is a bit of sanding or sealing every few years? Ask any preservationist about replacing a rotted floorboard or railing, and they will speak of  “a labor of love” that will revive you even as you restore it.

Maintaining a home fills a void in our lives that neither career nor domesticity quite touches… Most families experience extraordinary satisfaction after completing a common endeavor, such as repainting a room. It’s easy to see how houses can perform functions in our lives that have nothing to do with shelter or investment.

Home: Celebrating the Spaces of Your Heart

Home is where you must maintain your center, in the most important relationships with family. You don’t feel happiness based on how majestic something looks from the outside or how much it costs, but on how it touches us inside. Our dwellings shelter our dreams, while providing a place of refuge, a place of contentment.

At the end of our worst days, we return home to a sense of wholeness and the people who can see through us when we don’t want to be transparent.

Who you are at home is who you are. So remember, your biggest home improvement project always will be yourself.

“Inside the Gate” photograph by Jamieson Thomas.

Excerpted from “Home: Celebrating the Spaces of Your Heart,” available soon at Apple’s iBookstore.

My sister sold her house.

A red brick structure in McLean, Virginia, where she and her husband raised three children, the house sold two weeks after it was listed.

“I’m happy to get the contract,” she said on the phone, “but I also feel kind of sad.”

Sad to leave the bedroom hallway, lined with family photographs (or it was until the realtor ordered her to remove them and paint it.) For 28 years, her children walked to school, went to prom, and returned from college.

The entire family gathered there after our father’s funeral at Arlington National Cemetery. Then, repeated the event 20 years later when we buried our mother with him.

More than bricks and mortar, my sister is selling a house permeated with memories.

Last year, 15 percent of US home sales involved dwellings that had been in the same hands for more than 20 years, according to the National Association of Realtors. A century ago, several generations lived in the same house, so these transactions were more rare.

Today couples tend to unload large homes before they grow too old to take care of them. Downsizing has become a retirement “rite of passage,” as children follow career paths across the country and no longer live close enough to help out.

My sister and her husband will move into a new condo and I shall try to forget the address that I memorized 28 years ago. Soon , two new little boys will be playing in her old backyard.

My sister doesn’t need a five-bedroom house anymore. She just needs a moment to grieve.

Mention security in the same sentence as “home” and most people think of alarm systems,  child-proof locks on cabinets or grab bars in the shower.

But emotional security is far less tangible – yet, just as important – as physical safety.

When we are at home, we ought to experience a sense of satisfaction and peace of mind. Certain houses – like certain memorable love affairs – render us calm, free from doubt or fear. So overpowering is the feeling of safety that no amount of logic or attempts at reason can extinguish it.

No one survives for long, in a house permeated by a sense of uneasiness. Human beings need a peaceful, positive place to shelter them. Fortunately, that homey sense of safety and belonging can move with us from one house to the next,  and from one phase of our life to another.

Webster’s defines “secure” as “sturdy or strong, not likely to fail.”

Ideally, the home you live in ought to exemplify those traits, too.

Excerpted from “Home: Celebrating the Spaces of Your Heart,” an e-book by Renee Garrison and Tom Szumlic